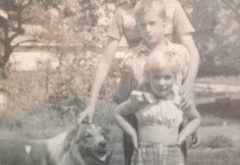 I’ve written the stories of Togo and Buddy and Barry—dogs famous in their own right. And I’ve told of Fala and Timber and Sweet Lips—dogs famous for their human companions (Roosevelt, Dickens, and Washington). But this space, at least for now, is for stories of dogs I’ve known and loved—call them everyday dog heroes. And I’d love to hear about your own dog heroes. Please feel free to send me stories and pictures of the dogs you’ve known and loved and I’ll be pleased and proud to post them here to share with any dog lovers who might happen by!

First and foremost in my Pantheon of Canine Heroes is Pal. Pal was the dog I knew in Iowa, where I lived  from the age of six weeks to 4. Pal was a Rough Collie, a genuine long-haired, needle-nosed, caramel-colored, white-chested Lassie Come Home beauty. She was an outdoor dog. Wouldn’t come in the house even if you paid her in raw meat—that is, until I came along. As my mother told it, the day I joined the household, Pal crept indoors and took up the position of sentry by my crib—and seldom left my side for the next four years. My busy mother grew to count on him to keep me out of trouble which, of course, increased with every day my mobility grew.

One day, inquisitive toddler that I was, I decided to stick my drool-damp fingertip into a live electrical outlet. At that precise moment, Pal happened to be right over my shoulder, trying to needle-nose me out of mischief. Too late, for a powerful jolt of electrical current surged through me and passed into him, sending us both flying across the room and slamming into the far wall. Pal shot me a reproachful look, shook himself and went off to lick his invisible wounds. Dogs being famously big-hearted, he soon forgave me for our misadventure, both of us chastened and permanently leery of plugs and all things electrical.

We left Iowa for the East Coast when I was four. The last sight I remember is Pal in the rearview window of our old Ford, head raised, tail wagging, standing next to his new master, a farmer friend of the family. My parents had decided that Pal being a country dog would not have been happy in the eastern suburbs.

When I was ten or so, then living in the east coast suburb of Sea Cliff, I discovered a collie living near my house. He was a genuine long-haired, needle-nosed, caramel-colored, white-chested Lassie Come Home beauty, who had the run of a vast fenced-in back yard. I felt sorry for the yard-bound dog and called him over to the fence to commiserate with him. It was then that I discovered, as he lifted his noble head to let me stroke him, that his eyes were blue and cloudy. The dog was blind. And then it hit me: this was Pal! He had followed me here all the way from Iowa for thousands of miles, through sleet and snow and all kinds of misfortune (losing his sight in the process!)  And now, here we were, reunited. Of course, the elegant White Russian lady who owned the house, the big yard, and the dog, had her own ideas. But she tolerated my daily after-school visits.  That he always came running when I called out, “Here, Pal!” seemed all the proof I needed that my own personal Lassie had come home to me.

Here is a picture of me and my two big brothers with Pal. Don’t be fooled by my big brother’s hand on his noble head. That dog was mine and, even then, he was guarding me…from electrical sockets and big brothers and all the world’s dangers.

Posted Under: Blogs
Home
Next >