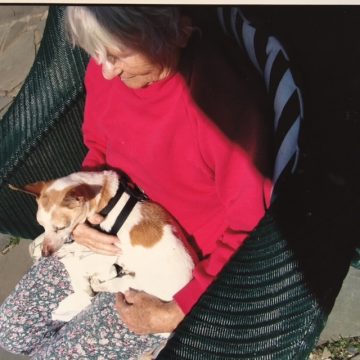 After Sandy, my mother, came to live with me and my family following a stroke, I hired my friend Jim to help with her rehab. He came with Lucky, a chihuahua he had recently inherited from an elderly neighbor who had passed away.

One of those one-person dogs, Lucky was astonishingly aggressive, considering his size and age, for he, too, was elderly—exactly how old was anyone’s guess. But time, as it had of my mother, had exacted a toll. He had mange, a crooked hind leg, partially paralyzed hind quarters, blindness in one eye,  about four teeth in his head, and unspeakably bad breath.  My husband and sons dubbed him Snag, short for Snaggletooth. Snag’s way of greeting us was to fasten onto us with those few remaining teeth and sink them into the tender flesh our ankles like needles. My mother was unsteady on her feet and seldom wore socks. Understandably, I was concerned for her.

It turns out, I need not have been.

Snag and Sandy took to each other like freshmen at a Sock Hop and were soon going steady. Needless to say, we adopted him and on Sandy’s lap Snag took up residence for the next three years, giving the evil eye, snarling and spitting at anyone who dared approach his girlfriend. One word from Sandy, though, and he would back down to a mere malodorous growl. They passed away (Lucky first) two months apart.

We were lucky to have Lucky and I’ll always be grateful to this bossy little bad boy for the joy he brought to my mother’s final years.

RIP, Snag. I hope you are in heaven, still nestled in Sandy’s lap, giving the angels the evil eye.