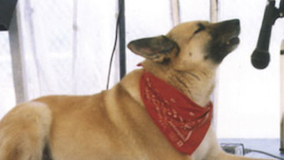 Not everyone is lucky enough to have a dog sing at her wedding, but I was. She was known to her legions of followers and fans as Beanie the Singing Dog. When my boyfriend and I eloped to Lake George, she was among the friends and family who helped celebrate our union.

Did Beanie really sing? When her beloved companion, David Klein played harmonica, Beanie would lift her head and let loose with a plaintive and melodic howl. She responded especially well to Pacobel’s Cannon. Not everyone appreciated Beanie’s musical talents. Some even said that she was howling, not out of joy, but because the harmonica hurt her ears. But anyone with an “ear” for music and a feel for dogs knew that the sound she made was nothing less than the Canine Music of the Spheres.

Beanie was, and continues to be, David’s principle muse. He celebrates her still in a series of iconic T-shirt designs. You may even have seen one of them: Beanie in profile with her signature bandana around her neck, serenading the crescent moon. Beanie is no longer with us but, luckily for us, her image and her voice live on—because she recorded an album (produced in conjunction with the Beanie for Peace Blues Band). It’s title? Fur on Your Lips, the Love Songs of Beanie the Singing Dog. You can even see her perform live on You-tube.

Beanie was a one-of-a-kind dog. But then again, aren’t they all?

Posted Under: Blogs
< Previous
Home
Next >