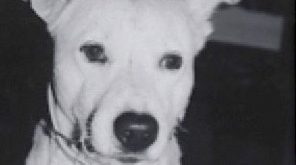 His name was Vaseline.

I knew him during the years after I had graduated college, when my husband and I would come out to Sea Cliff for the summer to escape the simmering city. By then, Fred had gone on to his Maker and my family found itself between dogs.

Vaseline wasn’t our dog, but oh, how I wished he were. He was officially the Zabriskis’ dog, although I like to think of him as a rough-hewn, street-wise Mr. Dog (0f Little Golden Book fame)—which is to say that he belonged to no one but himself. The Zabriskis were a big, rowdy family. They lived in a huge, old, rambling Victorian which the villagers called Zabriski Point. There were many Zabriski children and even more kids who liked to hang out there. Vaseline liked to hang out there, too, but he also liked to come and go as he pleased. He was, quite simply, the most independent dog I have ever known, a genuine dog-about-town, and everyone knew him.

In the days before Leash Laws, Vaseline walked the streets a free dog and, when he found a house that pleased him, he would scratch on the front door and invite himself in. When he visited our house, he would often stay for three or four days or even a week at a time. When his residences extended beyond a week, my mother would  call up Mrs. Zabriski and say, “I thought you should know, Vaseline’s still with us.” My mother had some cans of Alpo left over from Fred  and Vaseline happily dined on them. We hung out on the porch a lot in those days and Vaseline would hang out with us. People would come up on the porch to visit and greet Vaseline as if he were one of us.

At night, my younger brothers and I would fight over whose bed he would sleep on. But he generally made up his own mind which of us would feel his dense, muscular body weighing down our feet and legs like a bag of cement. Whenever Vaseline was with us, I felt infinitely privileged. And when he left as he inevitably would, moving on to someone else’s house or maybe returning to check in briefly at Zabriski Point, I always felt bereft.

Vaseline  was one of a kind but he left behind a legacy of white pit bull mixes with names like Valvoline and Gasoline and WD-40, in honor of their sire. I haven’t been back to Sea Cliff in years but I imagine his descendants still wander the streets. They are at the ends of leashes now but, in their hearts, I like to think they wander as free as Vaseline.

Posted Under: Blogs
< Previous
Home
Next >